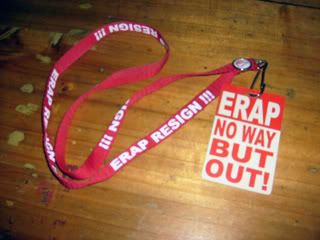 I was at EDSA Dos from start to finish, from when it was an unplanned convergence of frustrated, anonymous people who had listened or watched live as their own senators betrayed their trust, to when the big names came to take the lead and the credit.

I would have made it all the way to Malacañang on the last day, if Sherwil and I hadn't been at the tail-end of the crowd that managed to clog all the roads.

For what seemed like hours, we sat down on the concrete somewhere near the University Belt, waiting for the crowd to budge. No go. It was frustrating.
We'd been at Ortigas since five in the afternoon the day before, and we had marched across San Juan, etc. to find ourselves stuck somewhere in Manila.

It was hot, my feet were aching, and--call me prudish--but a nearby poster of a (fake) whorish, half-naked Tessie Aquino-Oreta with cuss words was really starting to get on my nerves.

Impatient for news--the hard-core activists had taken charge of our part of the crowd, and while I was appreciative of the order, I didn't agree with some of the inciting things they were shouting and it seemed like they had no idea either what was going on real-time--Sherwil and I decided to abandon the march to the presidential palace and look for the nearest television.

And so it was that we celebrated Erap's resignation with Coke, pizza and fried chicken at an almost-empty, air-conditioned Shakey's. While we munched on our grub, we also watched then-VP Gloria Macapagal-Arroyo being sworn in. It was the first time I'd seen here there. I was so happy.

I have other memories too. I remember Rosanna Roces shouting, "Putang ina mo Erap!" I remember seeing then-Sen. Robert Jaworski arriving and being attacked by a rallyist. We cheered as he left.

I remember seeing Bong Revilla arrive, and thinking, wow, he must know something I don't for betraying a bossom bud. I remember thinking the same way as Nora Aunor herself addressed the crowd.

I remember the APO Hiking Society and other EDSA artists performing, and feeling like I was part of a beautiful part of history, and that I, at 24, was making a change.

I also remember scolding someone when he got pissed off at someone who was squeezing through. I said something like, "Hey, we're in a peace rally." Everyone else was being so nice, even if there was barely a room to stand in and yet people were still coming and going. We wanted something good; getting your toes crushed was a small price to pay.

One night, I watched as a small Gardenia truck went up the Ortigas flyover and threw some sandwiches to the crowd below. On another night, Sherwil and I went to report on her mountaineer father, who was camped out on the Ortigas flyover with the Ayala Mountaineers. One early morning, I saw people serving free porridge.

I remember Robinson's Galleria open to the rallyists. I remember one late evening where almost everyone in it was wearing black, and Chavit Singson walked from one end to another, floor to floor. I cheered him along with the others, but I was also thinking, "Wow, from almost-convict to hero."

Those were four beautiful days, but they weren't easy. The rallying crowd would disperse early morning, so it didn't really disturb the working crowd, and there were always people to clean the mess. But we sacrificed work, sleep, and safety. Because we wanted to change things.

And we did. For a couple of days, months, or years--depending on how one sees it.

I spent four days getting my toes stepped on, squeezing through crowds, sniffing other people's body odors, eating whatever food we could buy from where we had planted ourselves, walking through city after city under the noonday sun, screaming my voice hoarse, staying up 24 hours...

And with one sweep of the pen, six years later, President GMA, who wasn't even there till the end, trashed the only thing left from that revolt in the name of politics, dashing all good memories I have of it.

She wasn't even there.