November 21, 2013
The past few weeks have been heartbreaking. Supertyphoon Yolanda decimated places I've recently loved: Tacloban, Palo, and Palompon in Leyte. And I haven't heard any news of Lavezares and tiny Biri Island in Samar, but they were also in the supertyphoon's path.

There I was, planning to write something about these places, and suddenly they're gone.

But what I've lost is nothing. Around 4,000 people are dead, and that's not counting those whose bodies have not been found yet or those who have no one left to report them. There are people who lost everything but the clothes on their backs. There are people who were forced by desperation to do the unthinkable.

I can't bear to watch news videos, and so I've watched none except for early videos that show Yolanda's fierce winds after it made landfall. I read the news and things posted online, but when my Facebook network exploded a few days ago into the biggest online argument ever (the government sucks vs just shut up already and help vs I can complain and help at the same time), I had to step back a little.

I repotted the survivors, planning to turn the cuttings into bonsai. I had planned to try growing bonsai for my 37th year alive.

The gardening helped me feel better. I was putting order in my tiny universe, contributing to life. It also reminded me how the Universe is as much about life and growth as it is about death and destruction.

And then this week's additional reminder: a weeks-old kitten at the back of the apartment. I thought it had been abandoned by its mother. 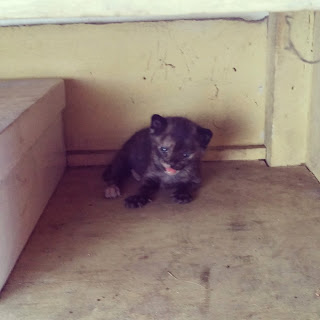 I had just finished reading up on relief efforts and was feeling overwhelmed again when I decided to check on plants I'd been growing in the gated area at the back of my room. I was surprised to see the tiny kitten in the table's shelf space. It was mewing, but no sound was coming out.

I panicked, not wanting to be responsible for its death. I was already feeling bad I wasn't helping Yolanda victims enough. I posted an SOS on Facebook and Instagram, but happily its mother came back two hours later. 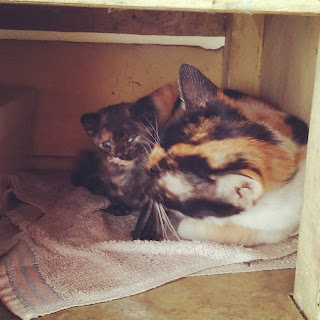 They're still there. I've been giving the mommy cat some food too, to help her with her breastfeeding. She's very protective of her baby, and I feel bad I'd almost taken her baby away believing she'd abandoned it.

I'm not keeping them; I'm just keeping them alive. Because it makes me feel I'm somehow, even in the littlest way possible, helping life.