My theme for 2019: good intentions

January 06, 2019
To be clear, it's living intentionally, but I wanted to use a noun, or noun phrase, as has been the tradition.

This theme snuck up on me when we got home after Christmas Eve dinner with my brother-in-law's family, as I was tidying up in the living room before going to bed.

I'd noticed that the Christmas lights were still on the table, and the branch my mother and our helper had painstakingly cut off from our podocarpus tree--which had, incidentally, borne fruit for the first time ever in 2018--was looking forlorn in its dark corner in our tiny patio.

That was our Christmas tree, still unfinished. It had to wait until Christmas morning to be completed, and it would have only one Christmas night to sparkle in its full glory. 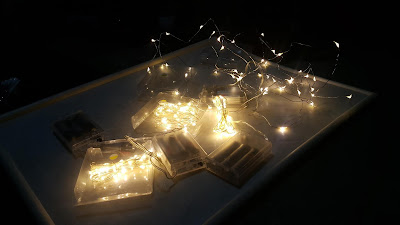 We'd had a good night with family, and in the spirit of the season, I switched on the lights. I watched them twinkle on the table, many of them still coiled, and thought to myself: here lies our good intentions.

But what we had really intended was to have a light, happy evening. We had intended to not be so tired from unnecessary preparations that we'd be cranky or exhausted before midnight. And that's what we got.

So, here's to living out all my good intentions this 2019!

It took a while to come up with this theme. I'd been thinking of making lifestyle changes, like simplifying my life further, speeding up my pursuit of minimalism, and going for zero waste as much as possible.

I was on a jeepney a few days before Christmas, and I noticed this boy in front of me. He was dressed in casual clothes--t-shirt, shorts, sneakers, no socks--and he was probably a university student. He had an arm up and on his wrist was a phrase tattoo: "mise en place" in cursive.

Mise en place is a French term associated with the culinary arts. It means "set up" or "putting everything in its proper place" to make cooking easier, especially for professional chefs.

But it's also a philosophy that extends beyond the kitchen. Here's a nice short article on it.

It almost became my theme for the new year--my life, after all, is a complete mess--until I felt the need to go bigger. I mean, did I really just want to put the elements of my life in order? Or did I also want to start creating new things as well, even as worked on having mise en place?

Speaking of mise en place, I was reminded of the term yet again when I met up with my old friends Eric and Donna for our annual Christmas meet-up.


We were talking about our shared lack of desire to have our own children, and the conversation zoomed in on the whys: some sort of fear, some form of laziness, and perhaps what others would misconstrue as selfishness, but what, I think, is really a question of readiness.

"Do you make your own bed when you wake up in the morning?" Eric asked. If even that takes too much effort, what more the work of parenthood?

Maybe I'll still be a mother. Or maybe not; time is no longer on my side. Or maybe I'll be a step mom. Or perhaps an adoptive mom.

But what I do know is that that's another level of mise en place. I wouldn't mind putting on the work, really.